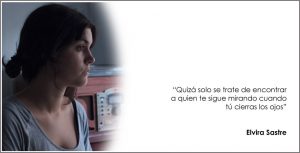 Elvira Sastre was born in Segovia in the summer of 1992 and from a very young age, thanks to her father’s influence, she shows her love for reading. At the age of twelve he wrote his first poem and three years later he opened a blog, “Relocos y Recuerdos”, which he still has active today. A short time later, he won the poetry prize “Emiliano Barral” with the short story Saudade.

A few years later, he moved to Madrid to take the university degree in English Studies, without knowing that this change would launch his poetic career into the sky of the capital. In Madrid, Elvira continues writing and begins to participate in poetic events accompanied by consecrated singers such as Adriana Moragues, Manu Míguez and Diego Ojeda and important poets such as Carlos Salem and Escandar Algeet. With a lot of work and thanks to his talent, he will come with the years to share the stage with artists like Andrés Suárez, Luis García Montero, Raquel Lanseros, Marwan or Benjamín Prado.

Little by little, Elvira Sastre is making a name for herself in Madrid’s cultural circuit, and that’s when the publishing house Lapsus Calami is interested in her work: together they publish “Forty-three ways to let their hair down”, in December 2013, with a prologue of the famous Benjamín Prado. It is Benjamin himself who bets for her and for her poetry, and in this way opens the way to the world of Spanish contemporary poetry. A few months later, in May 2014, the important publisher Valparaíso Ediciones, based in Spain and in Latin America, proposes to publish his second collection of poems: “Baluarte”, with which he still holds on top of poetry books most sold in the country and with which it causes furor in other Spanish-speaking countries such as Mexico, Argentina or Colombia. In between, the poet edits with the illustrator Adriana Moragues an artistic-literary project called “You the Watercolor / I the Lyric” that marries the poetry of Elvira with Adriana’s watercolors and from which they sell more than a thousand copies. Some time later, Sastre publishes “Nobody dances”, an anthology that brings together poems from his first two books and a handful of unpublished, with the publisher Valparaíso Ediciones.

At the same time, Elvira Sastre devotes part of her time to translation. Having just finished the Master’s Degree in Literary Translation from the Complutense University of Madrid, the author saw her first work published as a translator, in this case of poetry, in the Valparaíso publishing house Ediciones: “The children of Bob Dylan”, by the North American author Gordon E. McNeer Subsequently, he has translated into English the lyrics of the last two albums by Vetusta Morla, “La Deriva” and “Mismo sitio, Distinto lugar”; «Poemas de amor» by the famous Oscar Wilde, with a prologue included, also in Valparaíso Ediciones; «Other ways to use the mouth», by Rupi Kaur, with the publisher Espasa; and the novels “Todo es mentira”, by E. Lockhart, and “An illogical connection”, by John Corey Whaley, with the Alfaguara publishing house. The poetic career of Elvira Sastre, the visceral and direct poetry that she presents as well as her closeness to the reader allow the poet to participate in important festivals and literary events such as the Bogota Book Fair (FILBO), the Eñe Festival, the Madrid and Soria Book Fair, the Segovia Oral Storytellers Festival, the Buenos Aires Book Fair, the Inverso Festival, the Mexico City International Poetry Meeting 2015 or the Festival of the Lines of your Hand in Bogotá, and other cultural days. In the same way, the poet has lectured at several universities in the United States such as North Georgia University, Emory University and Hofstra University. In Spain, he has been at the University of Granada, where he also prepares a thesis, and has spent two years touring different institutes of the peninsula with the program “Literary Encounters” of the Ministry of Education. Elvira Sastre combines her poetic career with writing and translation. After a successful tour of the United States and Mexico, where “Bastion” was launched, the English translation of “Baluarte” by Gordon E. McNeer, the poet published in December 2016 her fourth book of poems, “The loneliness of a body accustomed to the wound »(ed. Visor), with the prestigious poetry publisher Visor. Two days after publication, the second edition was already underway. In the present, Elvira Sastre continues to present her works throughout Spain and Latin America while she is working on the translation of a collection of poems and preparing her first novel. He has just published his fifth book, «Aquella orilla nuestra», a work illustrated by Emiliano Batista (EMBA) and edited by Alfaguara.